Or Maybe we should mention the War - lots!! 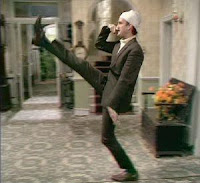 St. George is the Patron Saint of Scouting and today's parade was all about the different Beaver, Cub and Scouts sections from across the District renewing their "Promise", etc. However, No.2 Son got very confused about the purpose of the Parade, as the last one he attended was for Remembrance Day in November, where there were lots of people wearing medals and laying wreaths.


This led on to an interesting discussion about the War and it quickly became very clear that neither Son really understands it. In fairness, I think it is hard for any of us to truly comprehend the scale of it, but it is slightly sad to realise that my two don't really have any concept of how significant it was, and I'm sure they are not unique. However, I have today tried to explain that it is indeed important to remember, that a lot of ordinary people, did many extra-ordinary things and endured some horrendous things, for something they believed strongly in, for the protection of their families. Trying to explain concentration camps to an 8 year old and a 13 year old, whose main concern is when they can switch the Wii back on, is pretty heavy for a Sunday afternoon, but it was fascinating to see their knowledge and understanding grow. They also learned a little something about their Great-Grandparents.


My Grandmother, like many women, worked in an ammunitions factory during the War. I don't know whether the card below is unique, but I think there probably aren't many around. 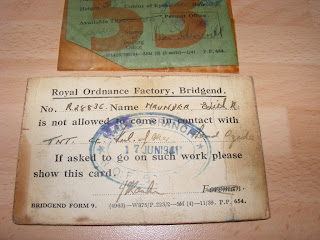 The bottom one shows that she had a medical exemption from working with TNT, which is very lucky, as many of the women who worked in that section blew themselves up or lost body parts putting the bombs together. She used to travel on the train from Swansea to Brigend every morning at 5 am and home again at 9pm. Although the train had blackout curtains at the windows, because the train tracks would shine silver in the dark, the German planes could follow the progress of the train over the tracks and would "straff" the trains, i.e. shoot lines of machine gun fire at the roof of the train, sometimes coming through the roof and hitting the women inside. This was deliberate to stop them getting to the factory. I asked her once how they coped with this, as it must have been terrifying, and she said "Oh, we just used to sing" Amazing!


My Grandmother worked at that factory every day, 7 days a week, for 3 years without a holiday or weekend off!! I cannot imagine what this was like and my children complain how short the school holidays are, it's just inconceivable to them.


My Grandfather fought in the War and was in the 8th Army, who fought at the battle of El Alamein. Now my knowledge of all the various battles and counterstrikes is flimsy, but I do know this was one of the fiercest and bloody battles of WW2, in a part of the world that was totally unfamiliar, certainly to man from South Wales. 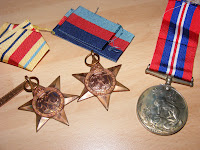 The picture above is of my Grandfather's medals, the one on the left is the Africa Star with the 8th Army band. I wish I knew how to put the ribbons on properly so they could be worn. I believe the Allied forces took over 13,000 casualties at El Alamein. Thankfully, my Grandfather came home at the end of the war, but he was injured and apparently came back a changed man. No wonder! Maybe when they are older they will not be as dismissive of it and it may come to mean more than it does right now, but only if we do mention the war.......... at least, occasionally.

This afternoon, I put my new found enthusiasm to use for somebody else and made Welshcakes for my Church's Community Cafe. Here's half a batch!

Hopefully tomorrow's customers will like them and if you'd like the recipe, (including the not so secret ingredient), I can put this up?

Now back to the Blankets.

Arwedd
Welcome to my Blog. I'm a 39 + 1 or 2 or more yr old, wife and Mum of 2 boys, with an awful lot more to learn in life. I'm still relatively new to Blogging and quite fragile, so I hope you'll be kind and maybe even enjoy reading what I have written. 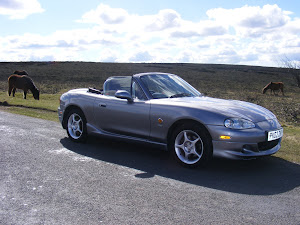 My Food and Weight Diary Blog